birthdays aren't really something we look forward to when we're way past 21 i think. or at least that's how i view it. it's cool to feel hey im a year older now.. but being 27, birthdays start to look kinda childish. and sometimes.. i think birthday isnt that much fun anymore because it's starting to make me feel old 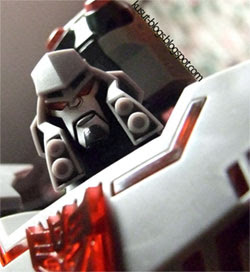 but yesterday's celebration was different. everyone came and we had lunch and a very elaborate dessert (because almost everyone brought dessert) which was awesome. and we all had fun (i hope) and talked and laughed (without any alcohol involved because we dont drink at all.. who needs alcohol when u have a good sense of humor?) and when it was time for presents, im surprised to get 3 presents.

okay flashback.. earlier that morning, a thought crossed my mind. if the birthday present is a riddle, the right answer for my birthday present this year would be movie tickets to watch Transformers 2. because i still havent seen it yet.. and i really wanna go watch it at the movies. end flashback

there were 3 presents for me. one medium sized box which obviously a box of chocolates.. a big white box the size of a microwave and a white envelope with a Gawler Cinema logo on it. 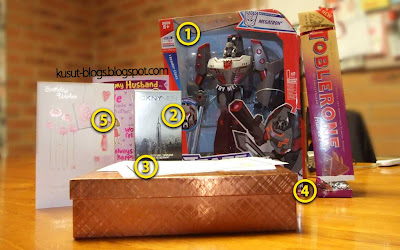 the medium box is a box of chocs from pak liem & family. (4) owh.. the big Toblerone is from babu & renu. i got it few days ago on my actual birthday.

the huge box is from my wife ^_^. i was expecting the box to actually hold another smaller (perhaps really small) box.. but i was wrong. there were 2 smaller boxes in it. one the size of a big shoebox, and the other is a small soap sized box. i opened the smaller box but it was not a soap.. it's a DKNY MEN perfume (2). the other box was Megatron! no the box didnt transform into a bigass ugly robot (would be pretty neat if it did :D) but it's the leader class Megatron (1) from the transformers animated series on CN. it is awesome!!! best present ever

and the final present is that envelope. it's from irida,rebecca and rachel. i was really excited to open that envelope. could it be movie tickets for transformers? well it is better.. a $50 gift certificate for Gawler Cinema (3). so i can watch heaps of movies.

but Megatron is still my favourite birthday present.. maybe best present ever!!! this is one of the reasons i love my wife so much. she really knows what im really into

btw.. just to be clear, (5) in the picture are birthday cards


i really had fun yesterday. thanks everyone for coming.. and all that talk about birthdays making me feel old.. i was so wrong bout that huh?
Posted by kusut at Monday, June 29, 2009 5 comments:

Labels: about me, rants

the first thing i read online today was of the death of michael jackkson. shocking! it is so sudden

He went into cardiac arrest at his Holmby Hills home in L.A. Thursday (a 911 call was placed shortly before 12:30 p.m. PT), according to TMZ, which first reported the news. Paramedics were unable to revive the singer (who had no pulse upon their arrival),..

well i guess it's true huh

come to think of it.. he haven't been looking well these past few years. i always thought he looked rather frail but then again im not a big fan and i dont really keep track of what he does. all the things i see comes from the news on tv that i dont watch all that much anyway

but regardless of all the controversial cosmetic surgeries, court cases, and his bizarre behaviour (especially with his baby); he will always be the king of pop. and for what his art and his songs did (and still do) to us in his glory days, thank you and good bye michael jackson. the pop world couldnt have had a greater king

edit :- he changed his name to Mikaeel when he converted to Islam. read more..
Posted by kusut at Friday, June 26, 2009 4 comments:

now ima get myself a birthday present
Posted by kusut at Thursday, June 25, 2009 5 comments:

Labels: about me, rants 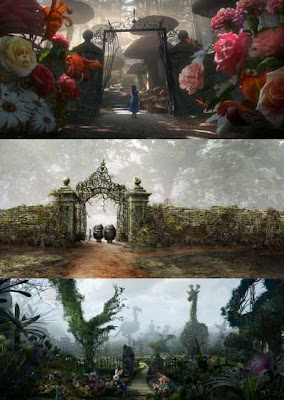 it is the next Tim Burton - Johnny Depp teamup and i think it is looking pretty cool. well.. yes i do think tim burton might wanna try and pick someone else to star in his film but on the other hand.. johnny depp seems to be the perfect actor for the role... again.

well that is an interesting combo. i remember NOT liking that story when i was a kid because i think it is just way too creepy. the disney's version gave me nightmare and that purple stripey cat thing didnt help one bit. but i watched the movie again recently and i realized how twisted and brilliant it was.

so now i found myself looking forward for the movie. although i cant help to feel a little unconvinced and thinking that maybe, like the previous tim burton + johnny depp movies, it only ended up an 'almost a great movie' to me. yes they are fun, they are interesting. i'd watch it again.. but its not the best movie

i like the fact that they are not making the original Alice in Wonderland. in this movie Alice is 17.. and she didnt remember ever going to Wonderland 10 years ago.

so.. the story is not the same but rather similar to the original.

so what did i do the past 3 weeks? attended a wedding in Kelana Jaya and Marang. took whole heaps of pics and deleted almost 2/3 of it ^_^

these are some kind of summary of the wedding. selamat pengantin baru Ain & Red
Posted by kusut at Monday, June 22, 2009 No comments: 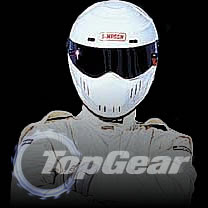 oh i am surprised. apparently yesterday.. the mysterious test driver from Top Gear took off his helmet and reveals his identity on the show. i dont wanna spoil it to those who doesn't know.. so i'll post the utube link in the comments. so watch it if u're curious


but the thing is.. i read bout all this in adelaidenow.com.au and we who dont have satelite tv or cable won't be able to watch the episode until maybe 6 months time. so thanks adelaidenow for spoiling the surprise for me >_<. it's not nice to put such a big spoiler as a headline.
Posted by kusut at Monday, June 22, 2009 3 comments:

am back in adelaide

...so tired right now. will start to write again tomorrow. or the day after :D
i plan to start blogging again asap. 3 weeks away is a loooong while.


and owh.. whatever happened to bloggerunited.com? i couldn't find the site at all @_@
Posted by kusut at Tuesday, June 16, 2009 No comments: