yesterday we thought we'd go watch this movie everyone been talking about. it seems almost everyone says it's scary as hell. so me, my wife and some friends decided to go watch it at gawler cinema, that old-school cinema. the cinema may look old but it is very well maintained. 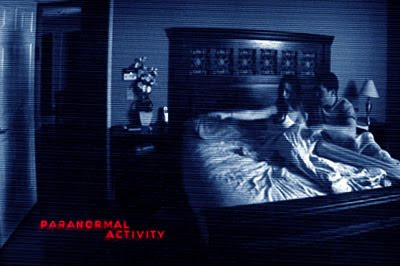 so how was the movie? if u liked 'the blair witch project', well u might find this interesting. as for me, i loved it. considering we just moved in to this house and we hear footsteps and scratchings in the wall and ceiling at night. and sometimes we were woken at 5am to a very loud hissing noise coming from the ceiling. we have possums in the roof but yeah.. Paranormal Activity did make me a little bit jumpy. a little bit.

after the movie, driving back home, we decided not to discuss (or even mention) the movie. and to get our minds off the creepy ideas the movie managed to force into our heads, we decided to watch The Big Bang Theory dvd in bed. it worked and we slept well that night.

i have not been freaked out by a horror movie for some time now. i think the last time was when my friends and i watched that original japanese 1998 horror film 'Ringu' or 'The Ring'. that was in 2002 (i think) and the idea was still fresh and before it got cliche. lucky the this weird genre have become too much of a cliche even after the success of the blair witch project.

i regret that i looked away when the visual got too.. unpleasant. now i really want to see how the face looked like (minimal spoiler here). i managed to find a friend who has that movie and watched it again. unfortunately the ending was different. and in a unexpectedly lucky way i managed to watch both endings in 24 hours. what a pleasant surprise.

i liked the hollywood ending better (by that i mean the new, movie-cut ending, not the original ending) but both endings are pretty good. but i still didnt get to see the face.
Posted by kusut at Wednesday, December 23, 2009 7 comments:

our trip have so far been pretty fun. spending time in penang, went to an enggagement kenduri in kulim, shopping at feringgi.. even the drive to KL was pretty fun. it was a fine day and when we arrive in KL it is already dark and it was quite a sight. but when we arrive at the hotel we booked things start to go wrong.

we were fooled by the very good website of this hotel in PJ and made bookings online. the pictures on the web were probably taken 10 years ago or an artist's impression of how the rooms will look like after they REALLY clean it up. a lesson we learn about online booking for hotel rooms, we cant smell the stink of cigarette through the website and they probably wont write that in the ad either. so my friends, do not stay at Lisa De Inn hotel PJ.

we cancelled our bookings and head to Cititel Midvalley, that hotel above midvalley megamall. lucky they have rooms available that night. by 11pm we managed to go to KL Central to pick up two more friends who just arrived from adelaide and took them to Cititel. that night all four of our mat salleh friends had a good rest and as for me and my wife, we went to McD for a prosperity burger and spent the night at my wife's cousin's place. it has been a long day

Aidiladha was not like the hari raya haji that we normally have. we went to the mosque in the morning and went to my wife's aunt's place (which is a block away from where we stayed the night before) for late breakfast. it did not occur to me at all that this is the first raya (both aidilfitri and aidiladha) we celebrated in malaysia for the last 2 years. we should've made a bigger celebration rite?

then later that afternoon we were out again.. visiting the mall where we used to spend our weekends together - midvalley megamall. we met up with our friends who stayed at cititel and went shopping. but unfortunately midvalley was packed and we did not enjoy shopping in that supermassive crowd (we're from adelaide and that many people at a shopping complex is somewhat impossibble) so we headed to big apple donut for a coffee and of course some very sweet donuts.

hummph.. i think being in kl for shopping on hari raya haji was the worst idea >_< however, fortunately we only spent a couple of days in kl and the next morning, the 8 of us were off to Indonesia!
Posted by kusut at Monday, December 21, 2009 2 comments:

our trip began with a 7 hour flight from Adelaide to KLIA and then another about an hour to Penang. we arrived midnight and stayed at UITM Hotel.

the hotel was the usual not-properly-maintained but a pretty good hotel. UITM Hotel only have (if im not mistaken) less than 20 rooms but the room was comfy and impressive with a massive double bed. costs about RM110 per night for our room and if u know someone who works for UITM u can get a discount (as if the rate isnt already cheap). sure the furnitures are not fancy Sheraton standard and the toilets doesnt have gold pipes or anything. but hot water and working plumbing system that doesnt smell is enough. like i said.. comfy.

the breakfast buffet was not bad.. but not exactly the standard buffet at normal hotels either. there was only one main dish when we stayed at the hotel, which was nasi lemak with several side dishes; and the more western breakfast like toast and bagels and croissants and cereals (usual stuff). but they were complimentary breakfast and we did eat a lot

in Penang we didnt do much. did some shopping at AEON Seberang Prai City Shopping Centre. went there the fist day and already our aussie friends have started their shopping spree. had to come back again the next day for more shopping lol. and as for me i didnt buy anything at Jusco.. didnt find anything that i fancied till we went to Feringgi that night. i bought myself a new 'Ray-Ban' (right.. RM10) and some CDs ^^

on the second day of our trip, our family gathered and drove to Kulim, Kedah for my brother-in-law's enggagement. it was a short drive through small towns and highways with beautiful view of paddy fields and traditional houses. i was driving so i couldnt get any snaps. sigh. but our aussie guests seem to be enjoying themselves. the things that we find boring and old-fashioned are exotic to them.

our aussie friends, our guests on this trip, are two ladies who works at the uni. we had planned a trip to indonesia for our friend's wedding and to spend a few days in malaysia on our way there. then when our family heard of our plan my brother-in-law thought it might be a good idea to have the enggagement kenduri while we were around.

we drove back to penang later that afternoon and stayed in penang aanother day for sight seeing and shopping. well.. mostly shopping. we didnt go to Queensbay Mall and we didnt go to Bukit Bendera or anywhere touristy. penang seems to always have a very bad traffic jam and we dont really have the luxury of time then. another thing that i kinda wanted to do was go see that statue of Sir Francis Light in penang. he is the father of Colonel William Light, the founder of Adelaide.

the next day our trip continued with a long drive to KL.. for Eid ul-Adha (hari raya haji). i had to drive so again i missed the opportunity to snap pictures. the view on PLUS highway on that sunny day was pretty awesome and the slightly hazy air kinda made the hills in Perak look like the paintings of the mountains in Guilin, china lol.

i have been away for over 2 weeks. i went on a trip home to malaysia for an enggagement, then to indonesia for a wedding, then back to malaysia for shopping :P. right now, still exhausted from the trip. so im not gonna write too much.

but here are some pics :D

i'll post up the details (hopefully) this week. and what and where those pics were taken. so.. keep visiting my blog k. cyaz~!
Posted by kusut at Monday, December 07, 2009 6 comments: